Hire a David Bowie tribute  from UK Live Entertainment, and you can be sure that you will be hiring a professional and experienced tribute artist.

Every tribute we support has been tried and tested and has a well-proven track record for delivering quality entertainment and professionalism both on and off stage. Enjoy browsing our roster of David Bowie Tribute.

We've handpicked a roster of the best David Bowie tribute bands and acts and present them together for you to choose your favourite.

We hand select all of our tributes and entertainers, saving you the trouble of searching the Internet and having to decide between acts of all standards. When you book an act from us, you can be certain you are booking the best. We only represent the best bands and acts in their chosen field.

With such an excellent selection of David Bowie tribute acts and bands to choose from, we are confident you will find the perfect act for your venue, party or event, and help is close at hand, you can chat-message us or call us at any time for professional help and support with choosing the right entertainer for you. Our consultancy service is free, and we're here to help!

All of our David Bowie tributes are experienced, professional entertainers; they take great pride in their shows and work hard to maintain the highest standards. They are all guaranteed to present excellent quality entertainment.

No matter what the occasion or event we can suggest a choice of Bowie tributes that will be right for you!

All of our bowie tributes have worked hard to develop their acts to the most exacting standards and present shows that are as realistic and authentic as possible, with replica costumes, excellent musicianship and sound-alike singing, brilliant production and stagecraft.

All of our Bowie tributes are able to provide their own P.A. sound and lighting systems, and their equipment is usually suitable for average sized venues. Additional equipment can be obtained for larger venues and events.

All of our David Bowie Tribute shows have performed extensively throughout the UK and abroad and at all types of venues and events. They have performed their shows to very large and very small audiences at festivals, universities, live music venues, and at private and corporate parties and events. No matter the size of the audience, stage or event, you can be certain that our acts will always do their best to present an excellent show performance and that they will be totally professional from start to finish.

David Bowie’s music is iconic and timeless, it has been enjoyed the world over and transcends generations, nationalities and languages, a huge star the world over his music is still played in all corners of the world and is appreciated by millions.

Hire a David Bowie tribute for your party, occasion, festival, music venue, theatre, wedding or event and watch as your audience appreciates the timeless music and spectacle.

Please take a look at our handpicked selection of first class David Bowie tributes and feel free to ask any questions you may have, we can check our band's and act’s availabilities for you quickly and can have a band booked for you within a very short period of time!

David Bowie was the stage and theatrical name for David Robert Jones, a hugely influential and highly talented British singer, songwriter and actor born January 8th1947 and who sadly passed away January 2016.

Born and brought up in South London, David’s interest in music as a child was positively encouraged by his family. After studying music, art and design, he eventually decided to pursue a professional career as a musician in 1963.

David and his music have featured in popular music and British culture for more than fifty years; his songwriting and production achievements have always been highly innovative and considered well before their time, he broke down barriers and cross-fertilised music genres in a way that that other artist could only dream about!

He constantly re-invented himself through his music, production and his personal individual styling.

He explored and experimented with several music styles, before re-emerging in 1972 with his alter ego Ziggy Stardust.

The Ziggy Stardust character was lead and encouraged by the success Bowie enjoyed from his single “Stardust” and his album The Rise and Fall of Ziggy Stardust and the Spiders from Mars, which gained him international recognition, abundant accolades, and mass popularity worldwide.

1975 saw another complete shift in style towards “Plastic Soul” which was not so readily accepted or embraced by his ardent fans.  The style, however, was very successful for Bowie who enjoyed considerable crossover success in the USA with his mega-hit single “Fame” and the Album Young Americans.

He added acting to his list of talents and starred in the 1976 film the Man Who Fell To Earth and went on to release Station to Station, his tenth studio Album and the one, which is regarded as his most accessible albums and his most penetrable.

1977 was another year of confoundment for Bowie’s admirers and critics alike, with his release of album Low which was the first of a trio of album collaborations with Brian Eno that later became commonly known as the “Berlin Trilogy”. The other two album titles followed in 1977 and 1979 and were called Heroes and Lodger. All three albums achieved top-five listing and all received rave critical praise.

Bowie’s success was patchy during the late 1970s, but he went on to enjoyed success with the single “Ashes to Ashes” in the UK in 1980, and with “Under Pressure” in the following year, which was a collaboration with the band Queen.

Chart success came again in 1983 for David Bowie, both in the UK and USA, where he enjoyed chart success with the title track to the huge hit album Let’s Dance.

David Bowie’s record sales are estimated to have exceeded 150 million worldwide, which puts him firmly in the category of one of the world’s best-selling male music artists of all time.

David was honoured with no less than nine platinum albums in the United Kingdom and a further eight silver albums.

He recorded and released a total of eleven albums that achieved No 1 status.

His awards in the USA were no less impressive where he was awarded five platinum, and seven golds!

In 1996, David Bowie was inducted to the Rock and Roll Hall of Fame.

David Bowie’s record sales are estimated to have exceeded 150 million worldwide which puts him firmly in the category of one of the world’s best-selling male music artists of all time.

David Bowie, one of the nicest, most significant, most prolific and most influential singer-songwriter-producers of modern times.

His memory lives on through his amazing music, which will be played forever!

Hire the David Bowie tribute of your choice today from UK Live Entertainment, and watch your party rock, call us or chat-message us now, we're here to help! 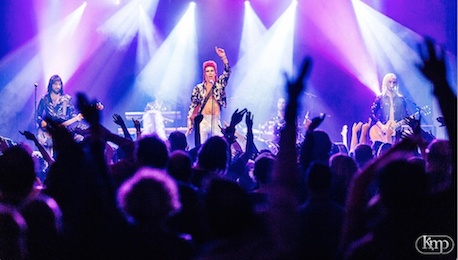 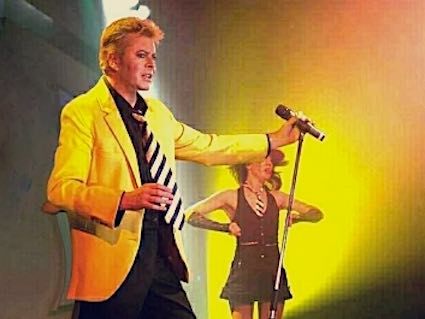 David Bowie Tribute - Jean Genie. A dazzling performance by one of the 'must see' tributes Jean Genie David Bowie this artiste quire simply is David Bowie! Spectacular so ... View More

David Bowie Tribute - Jean Genie. A dazzling performance by one of the 'must see' tributes Jean Geni ... View More

David Bowie Tribute - Jean Genie. A dazzling performance by one of the 'must see' tributes Jean Genie David Bowie this a ... View More

David Bowie Tribute - Jean Genie. A dazzling performance by one of the ... View More

David Bowie Tribute - Jean Genie. A dazzling performance by one of the 'must see' tributes Jean Geni ... View More

David Bowie Tribute - Jean Genie. A dazzling performance by one of the 'must see ... View More

David Bowie Tribute - Jean Genie. A dazzling performance by one of the ... View More 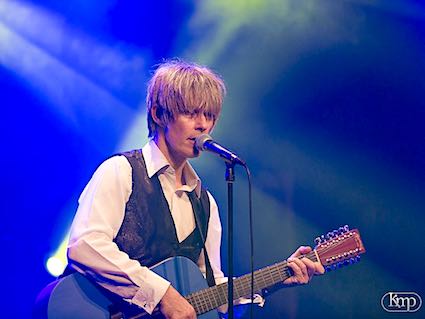 Stardust is a David Bowie Tribute Band that brilliantly and authentically re-creates the unique sound and vision which Bowie is so famous for! A brilliant tribute show pe ... View More

Stardust is a David Bowie Tribute Band that brilliantly and authentically re-creates the unique sound and vision which B ... View More

Stardust is a David Bowie Tribute Band that brilliantly and authentica ... View More

Stardust is a David Bowie Tribute Band that brilliantly and authentically re-creates the unique sound and vision which Bowie is so famous for! A brilliant tribute show performed by a highly talented band ideal for corporate events weddings and functions a ... View More

Stardust is a David Bowie Tribute Band that brilliantly and authentica ... View More