Hire a Freddie Mercury tribute act   from UK Live Entertainment, and you can be certain that you will be hiring a professional and experienced tribute entertainer.

Every Freddie Mercury tribute act we support has been tried and tested and has a well-proven track record for delivering quality entertainment and professionalism both on and off stage.

Choose a first-class Freddie Mercury tribute act from our exclusive selection of the best artists available in the UK!

All of our acts and bands have been hand-curated and are the best quality professional Freddie Mercury acts available to hire.

No matter which show-format you choose, all of our acts perform the Freddie Mercury lead vocals 100% live.

All of our acts are experienced, professional, quality entertainers, they all have extensive performance experience and are all used to performing their shows in both big and small venues.

Constantly in-demand to perform their Freddie Mercury shows throughout the UK, they are also available to travel and perform abroad if requested.

Our acts regularly perform their shows right across the UK and can be seen at live music venues, universities and colleges, holiday parks and cruise ships, casinos, and theatres. They are also in demand to perform at private parties, corporate events and special occasions.

All of the best-known and most popular Freddie Mercury and Queen songs will be performed in their show sets, and you can expect to hear many of these songs performed:

Amongst many other brilliant songs too!

Should you have a special Freddie Mercury or Queen song request, these can usually be accommodated if requested in advance.

Freddie Mercury was the professional stage name of Farrokh Bulsara a British, singer, entertainer, record producer and songwriter best known as the frontman and lead singer of the popular and massively successful British rock band “Queen”.

Freddie was born 5 September 1946 in British Protectorate of the Sultanate of Zanzibar, East Africa. He grew up both there and elsewhere in Indian until he reached mid-teens.

His parents Bomi and Jer Bulsars re-located with their son and daughter, Freddie’s sister, Kashmira, to the UK and settled in Middlesex, following political unrest in Zanzibar.

Freddie formed the band Queen with Roger Taylor and Brian May in 1970, the band enjoyed massive worldwide success as a recording and live-performance rock band and Freddie’s flamboyant style, stage presence, song-writing and composition skills all contributed to the band’s global success.

Freddie became interested in music early on in life and started to take piano lessons when he was 7 years old, from the age of 8 he was educated at a boarding school where he progressed his musical interests and started a school band at the age of 12, which he called The Hectics. The band performed covers of popular bands and singers current at that time, including Cliff Richard and Little Richard.

After the family relocating to the UK, Freddie enrolled at the Isleworth Polytechnic to study art, and after graduating with a diploma in Art and Graphic Design he joined a series of different bands and tried a number of jobs before eventually joining the Liverpool based band “Ibex”, who later became known as Wreckage. The band didn’t work out and he joined another band called “Sour Milk Sea” which was equally as unsuccessful.

In the April of 1970, Freddie joined musical forces with Brian May and Roger Taylor who had previously worked together in another band. Freddie chose the name “Queen” for the band against protests from the other band members and their then management, Trident. From this point in time, the band “Queen” was launched and success was waiting just around the corner for them.

Freddie had a natural ability and an ear for music, he was able to listen to any song he heard and then re-create its tune on the piano.

Freddie wrote or co-wrote and composed numerous fantastic hit songs performed by Queen including “Bohemian Rhapsody”, Don’t Stop Me Now”, “We Are The Champions”, “Killer Queen”, “Somebody To Love” and “Crazy Little Thing Called Love” amongst others.

Freddie actively pursued a solo career alongside his performances with his band Queen.

Freddie has constantly been voted as one of the greatest singers in the history of pop and rock music, he was positioned at No. 58 in the BBC’s viewers and listeners poll of the Top 100 Greatest Britons of all time. He was later ranked at position 18 in the Rolling Stone list of the 100 greatest singers ever, which was conducted in 2008.

Freddie was posthumously awarded a BRIT Award for his Outstanding Contribution to British Music 1992, and a concert was staged in tribute to his achievements at Wembley Stadium, London.

Freddie contracted HIV and eventually died from AIDS back in 1991 at a time when little was known about the illness.

One of Britain’s most flamboyant, outrageous, best-loved and most talented singer, songwriter, musician, composer, entertainers, Freddie and his music are very sadly missed, but is legacy in music and memories will live on forever!

Hire a Freddie Mercury tribute act from UK Live Entertainment and be assured that you will be booking a professional tribute singer and entertainer with the full support and backup of the UK’s leading tribute agency. 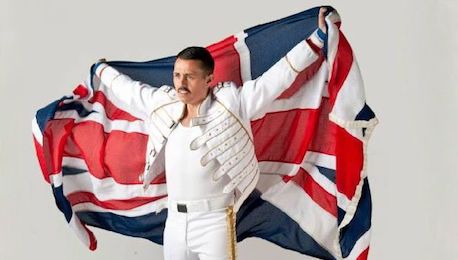